Last Friday, Kara and I flew back from Dubai to San Diego on British Airways, with a stopover at London Heathrow. It was the end of our long, two-week stay in the Middle East, and before that we’d spent a week in Central Ohio, so it’d been three weeks since we’d been home. Though we enjoyed our time in the UAE and especially Oman, we were exhausted from the world of flights, bad restaurants, rentals cars and hotels and eager to get home from the road. Still, a 16-hour layover in London was too tempting to pass up, especially since it was Kara’s first time there. We could’ve taken the easy route, booked a hotel at the airport and slept in for our 1:40pm flight the next day. But, where’s the fun in that?

After landing at Heathrow at 7:00pm after a relatively short 7-hour flight from Dubai, we cleared immigration and customs (aided by an overly friendly British immigration agent) and hopped on the Heathrow Express. It reminded us a lot of Airport Express in Hong Kong, although significantly more expensive for a much shorter trip. We got into Paddington Station in less than 20 minutes and walked to the Mecure Hotel, adjacent to the train station.  The hotel room was tiny even by Hong Kong standards, but clean and functional, and after we dropped off our stuff, we headed out in the mild January night. While we didn’t pack any winter clothes, as luck would have it, temps in London were in the high 40s and would reach 50 the next day.

We took the Tube from Paddington to Piccadilly Circus and, upon exiting the subway, saw the familiar Times Square-like screen. On my first visit to London in 1996, I though Piccadilly Circus was an actual circus, with elephants and a big top tent. I was disappointed to learn that it was merely a road junction. We walked from Piccadilly to Leicester Square, the theater district, and ended up in Chinatown. Since we were both hungry, I made the decision to get a Cantonese dinner, and regretted it later when we were served very mediocre wonton soup and “yeung chow” fried rice. Granted, having lived in Hong Kong, our expectations for Chinese food may be unreasonably high, but bad Chinese food is bad Chinese food, no matter where you are.

After dinner, we walked over to The Porcupine, a traditional pub on Charing Cross Road. Since we weren’t going to find any San Diego microbrews on tap at this bar, we each had a pint of Foxy Blonde. It was a mixed crowd inside the pub — theatergoers, professional types in their mid-20s, and tourists. London reminds me a lot of New York or Hong Kong — a city where, in any given watering hole, you’ll always find an interesting mix of locals and ex-pats, spanning a number of different professions, many of whom seem happy and willing to pay for the privilege of living there. After we downed our beers, our jetlag hit, so we hailed a black cab that took us back to Paddington.

The next morning, we checked out of our hotel and left our bags. We took the Tube, along with many commuters during the morning rush hour, to Green Acre, and stopped at a Cafe Nero for coffee and a scone. We then walked over to Buckingham Palace through Green Park, which, according to the helpful sign, took seven minutes. Being in England and seeing signs everywhere, we now understood why Hong Kong was so well marked; the UK makes it difficult to get lost.  The sun was shining and it was a pleasant walk through the park. I was in London last summer for work, and wandered around Hyde Park on a Sunday afternoon. It was packed with people. On a weekday in January, the park was relatively empty, and there weren’t many visitors to Buckingham Palace either. Inexplicably, the guards had grey uniforms instead of the iconic red, which was a bit disappointing. We took a few photos near the gate. Sadly, we would miss the changing of the guard, which would take place at 11:30am. 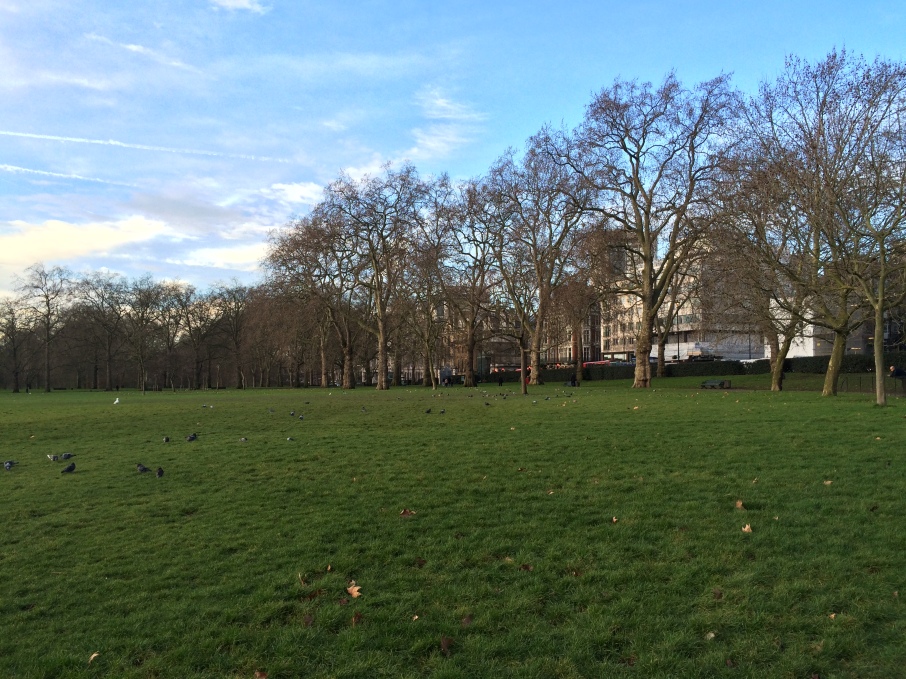 From Buckingham Palace, we were able to see Big Ben and the London Eye, so instead of getting back on the Tube, we decided to walk. We strolled through St. James Park, stopping to take pictures on the bridge. We learned that the bridge had a lot of history: back in the 1800s there used to be a Chinese pagoda on the bridge, before it caught fire and burned down during a fireworks display in 1825. 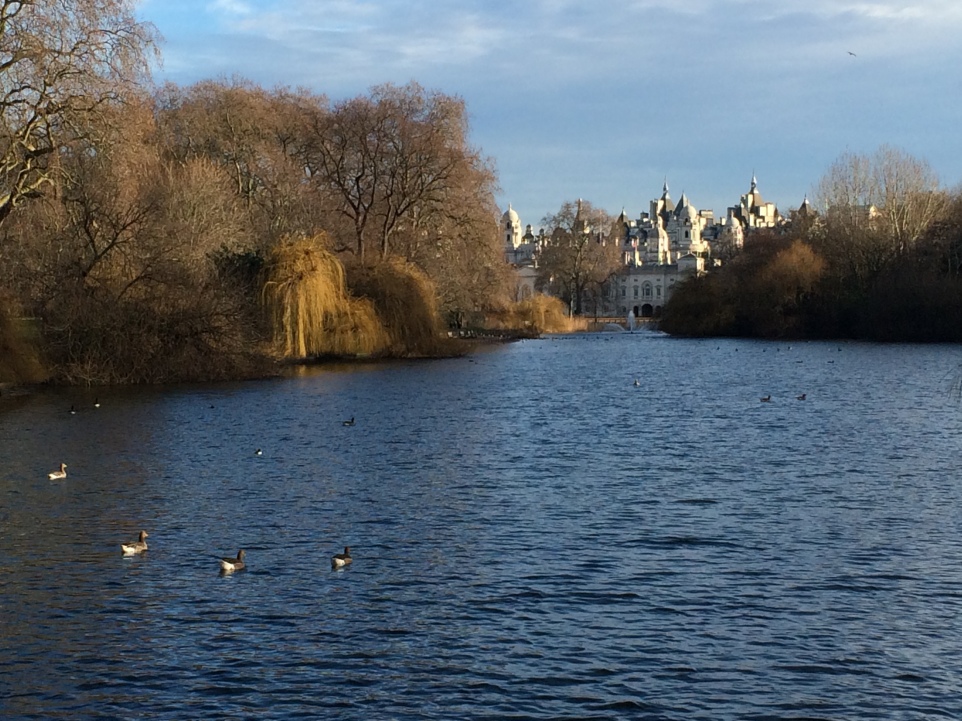 Before long, we came to Westminster Abbey and Big Ben, which reminded us of the movie “V is for Vendetta”. We crossed the River Thames on the Westminster Bridge and were able to snap a few photographs.

After crossing the river, we walked along the path on the river. Back in the summer, I jogged along this path in the mornings. This time, there weren’t nearly as many people, but the riverbank area was still impressive. The London Eye, a gigantic Ferris wheel, was there, and there were a number of restaurants and shops as well as the Tate Museum of Modern Art.  We walked all the way to The Globe Theater, which replicated the real Globe during Shakespeare’s time. The Globe gives tours and exhibitions and even puts on productions of Shakespearean plays. Being in the country where theater originated, and being able to see a Shakespearean production, would definitely be cool.

When the clock struck 11:00am, we took a black cab back to the Mecure Hotel, collected our bags and headed for Heathrow. It was an extremely short trip — a tease, really — but sometimes it’s less about seeing everything (impossible given the short layover) and more about maximizing every moment we had. Given the fact that we’d be in Europe this coming summer, I am sure we will be back in London before long.

Musings and Photos Across Continents

The adventures of a travelling couple

bits of things that make an impression ~ Santulan

The Gift of Travel

experiences and gifts of travel

A blog about love, family and relationships in China, including interracial and intercultural love. 洋媳妇谈中国